When I first got diagnosed I didn’t think I would be able to get back into any socials circles without worrying about my Crohn’s playing up and what on earth would I do if my symptoms struck! Turns out you just adapt and sometimes things are only temporarily bad. Plus I have an awesome group of friends who I don’t think quite frankly care about my broken immune system and care more about my dazzling personality and what I can bring to the table. I mean that in the literal sense, snacks and of course my amazing player skills (I may have used some artisitc license on their thoughts) 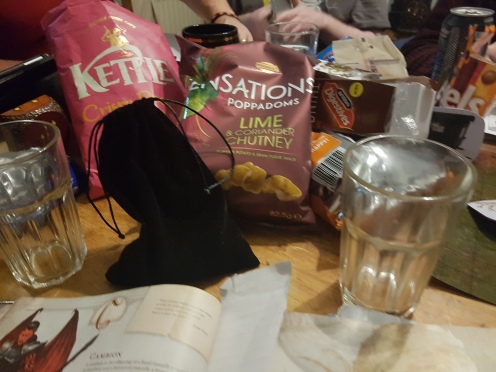 So I got back into an old hobby of mine Dungeons and Dragons – and here begins the story of an unlikely group of miscreants….*cough heroes – starting with Cordelia Farce, Bard extraordinaire:

On the road to nowhere, there was the “Inn Between”, a small child looked out of a high window to somewhere. She dreamt of a far-off land full of mighty heroes and beautiful maidens and of tales untold.

It was a small Inn but a bustling one, when her nose wasn’t buried in books Cordelia would sit around the fire in the tavern and listen to traveller’s stories from far and wide, her eyes like saucers drinking in every imaginary detail.

One uneventful day gossip spread like wild fire, a travelling circus was coming to town!

Cordelia was beside herself, like all the other children in the place they didn’t see much entertainment and it was once in a blue moon such an event would happen.

Later that evening gathered in the square the townsfolk watched on with merriment.

Upfront Cordelia watched in awe as the Pan played his flute, a bewitching melody to be heard.

She laughed at the jesters, cheered at the acrobats and listened to the music, stories and poetry with a glad heart.

Sadly, the festivities like all good things had to come to an end, the circus moved on and so did the town. It was back to business as usual.

Cordelia treasured that day, she couldn’t get the Pan out of her head. The music struck something within her and she vowed to practice to be a as good as him one day.

Over the years she blossomed into a lithe young woman. Most of her days were spent in the tavern serving the patrons, or in the back with her mam cleaning or preparing the food.

She would grab every chance she could to perform in the tavern with her flute or to regale the smaller children with tales she had read from books or heard from other travellers. She knew she was getting better day by day with the flute as raucous laughter and cheering would always ensue.

It wasn’t an inspiring life and it grew harder ever day to keep food on the table for the three of them.

So not wanting to be a burden and to give something back Cordelia Farce waved her parents good bye and set out into the world with a tale on her lips and a song in her heart.